As you start to get more familiar with ice cream making and start to understand the various methods of creating and infusing flavors, you’ll start thinking about inventing some of your own recipes. One of the most enticing types of recipe to create is the weird/novelty flavor that your friends and family can’t imagine will taste good but when they reluctantly take that first bite they are pleasantly surprised. That’s the dream, but it’s often far from the reality so try at your own risk. This post has some of my experiences and thoughts on novelty ice cream flavors. 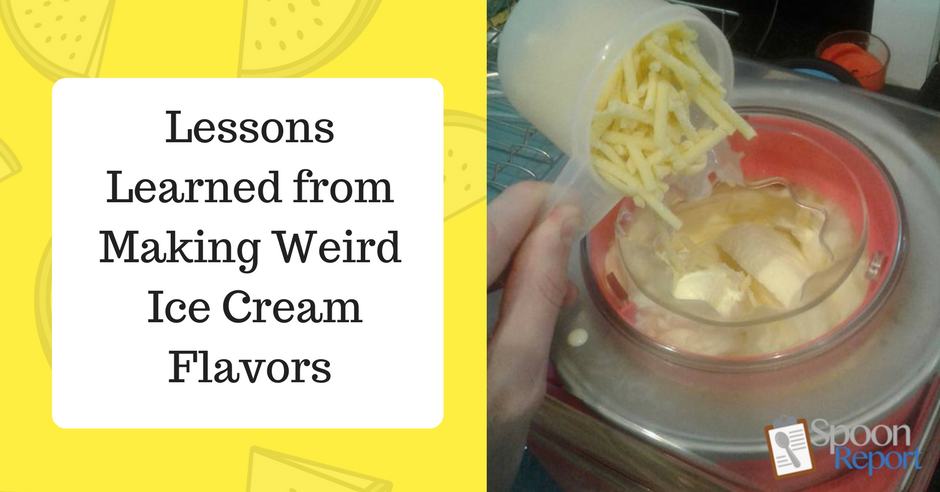 Here are some examples of weird and novelty flavors that I’ve seen or made.

Sweet Corn Bacon Ice Cream with Cocoa Nibs (recipe here) – This one sounded so promising because sweet corn is actually sweet and is commonly used in desserts in Asia so I could see how it would work in an ice cream. Unfortunately it didn’t go down very well in our household. As I’ll discuss below, bacon can be hit or miss and with the strong, bitter flavor of the cocoa nibs it just didn’t work.

Note: To be fair, I think the main problem was that it was too salty and it’s possible that I made a mistake with the salt measurement. The recipe calls for ½ teaspoon, which is definitely high, but maybe I added more accidentally… *shrug*

Vegemite Ice Cream (recipe here) – Vegemite is a black and salty Australian spread. Most Australians, let alone Americans, thought the idea of Vegemite ice cream was crazy but I actually think this recipe is pretty darn good. It tastes a bit like salted caramel.

Pro tip: when I gave this to my Australian friends to try I mostly didn’t tell them what it was until afterwards so they didn’t go into the tasting with any preconceived notions. The responses were generally pretty positive, although no one guessed the flavor outright.

Here’s one of those Buzzfeed tasting videos with people tasting Australian foods. You can see the reactions to Vegemite at 1:39 in the video.

This is totally the wrong way to eat this spread so the reactions aren’t really surprising. When spread thinly on a piece of toast with a generous amount of butter, it tastes much better.

Caesar Salad Ice Cream – Who doesn’t love a Caesar Salad, but as an ice cream? Definitely seems like a stretch. This one I haven’t actually tried so I can’t speak from personal experience but I saw this story about it and apparently enough people like to for it to become popular so there must be something to it.

The intrigue with these weird flavors is strong because I have so many questions about whether it actually tastes good, how they create the flavor and how closely it matches a Caesar salad. I think that’s part of the draw to making and eating these types of flavors.

Cheese Ice Cream – This one is a bit controversial as I think there can be a lot of variation in the recipes. I’ve made several batches of cheese cake ice cream and they were delicious, but here we’re talking about regular cheese. I heard it’s actually one of the most popular flavors in the Philippines so I just had to try it.

Unfortunately, the recipe I tried didn’t do it for me. The base actually had cream cheese which is common in cheesecake ice cream so that was great but then it had pieces of cheddar cheese as a mix in and they just tasted like chunks of frozen cheese which wasn’t good.

Bacon Ice Cream – I made this as maple bacon ice cream so the base was a really yummy maple flavor and then there were bits of candied bacon mixed in. I think I made the bits of bacon a little too large and perhaps not crispy enough which took away from the overall flavor. Bacon is amazing in general so I think this flavor has a lot going for it if you can get it right. It’s also included in some of the popular gourmet recipe books so it’s obviously something that can work. 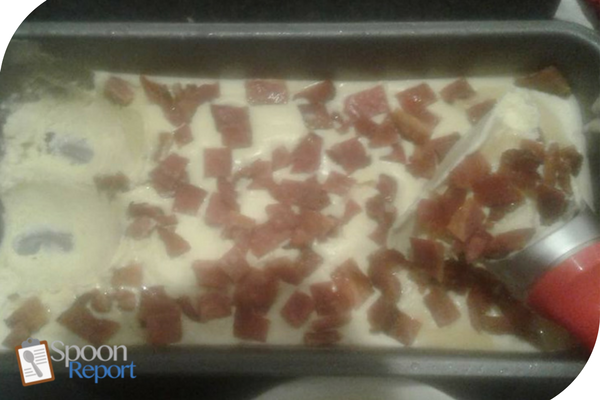 Even if you happen on a good recipe you really need to nail the right ingredients and the execution in order to make it a success. Its awesome when someone is super skeptical of your creation but their face produces a big smile once they try it. However, on the flip side, some people just can’t get the weirdness of the flavor out of their heads and they can’t enjoy it, even if it actually does taste great. Don’t sweat it too much, you can’t please everybody.

If you’re inventing a new recipe then some trial and error will almost certainly be required, particularly for the weird and novelty flavors. If you’re going to be serving your creation at a dinner party or other event, you should definitely make a test batch first to make sure it works.

The objective is always to make something that exactly matches the weird flavor you’re trying to emulate e.g. Caesar Salad and something that is delicious, but often doing both just isn’t possible. You’ll probably have to give up some ‘exactness’ in order to produce an ice cream that’s actually pleasant to consume. There’s nothing wrong with experimentation but don’t get obsessed with recreating a novelty flavor exactly at the expense of the overall experience.

Getting defeated by a troublesome flavor or recipe can be demoralizing but we can’t win all the time and you don’t know the limits if you don’t overstep them occasionally so don’t let it get you down. I find that if I make a batch that doesn’t land as well as I’d hoped, I try to make something a bit safer for the new few attempts so I can get my confidence back up before trying something experimental again.

Now you’ve been warned about the potential pitfalls and equipped with some hard learned lessons, you can go out into the ice cream world and tackle those weird and wonderful flavors. I don’t like to be told what to do either so I forgive you if you don’t heed my advice. Don’t say I didn’t warn you. But if you do happen to nail a deliciously weird (weirdly delicious) flavor, send it to me so I can post it on the blog and update this article to help motivate those who come after you.