It all starts with the ice cream base. This is the part of the recipe which shapes the texture but remains relatively neutral on flavor, although some base recipes do include vanilla. You then add your flavoring ingredients to get the desired flavor that you want in your end product. Sometimes the base will need to be altered for different flavoring types, to keep the ratios of sugar, fat, protein etc. right. In this article I’m going through the common variations in base recipes that you’re likely to come across on your homemade ice cream journey. Acquaint yourself with these variations now and you will be better equipped when you want to adapt a recipe or create your own. 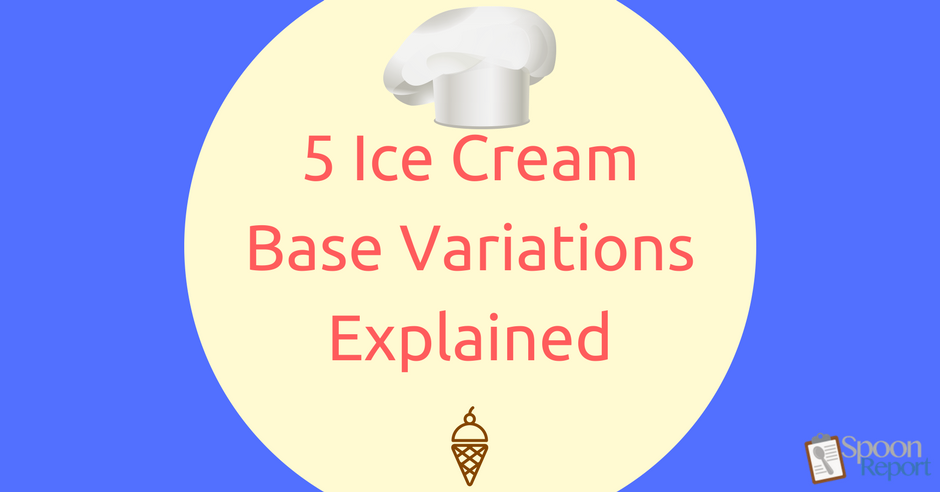 You’ll see lots of base recipe variation with the amounts of cream and milk as well as the possible inclusion of half and half or condensed or evaporated milk. Another thing you need to keep in mind is the fat percentage in each of the different ingredients as different products can be quite different. It’s the fat percentage, and to a lesser extent protein, that’s going to affect the texture and consistency of your ice cream. The fat molecules in your recipe get in between the water molecules and therefore physically keep the ice crystals from getting too big, which makes the ice cream more smooth. Fattier ice creams also hold onto their flavor longer which makes for a more mellow taste.

Milk has fat too but a lot less than cream and it is also mostly water. A higher proportion of milk tends to create a lighter ice cream with a sharper flavor but too much can make it icy. You can also use condensed or evaporated milk to introduce milk solids with less or no added water.

It’s worth noting here that one of the main differences between Ice Cream and Gelato is the milk to cream ratio. These types don’t actually have exact definitions and in fact, ‘gelato’ is just ‘ice cream’ in Italian. However, it’s generally accepted that ice cream tends to have more cream and less milk (or no milk) and gelato has more milk and less cream (or no cream). There are also other differences, namely that Gelato has less air incorporated and is stored at a lower temperature which makes it softer.

This is another important difference between base types. You’ll probably find that most homemade recipes these days use the ‘egg’ version but you’ll also find some eggless recipes around too. This variation is often described as French style vs Philadelphia or American style, with the former including eggs and the latter not.

The difference in preparation is that the French style involves creating an egg custard where a number of egg yolks are separated from their whites, whisked together and then slowly heated until they become a custard. This process introduces an element of complexity into your ice cream making which has the potential to derail you if you’re not careful. Definitely invest in a digital thermometer and remember to stir constantly and pay attention when making your egg custard.

The heating process should kill harmful bacteria which may be in your eggs but using an eggless recipe will prevent this risk entirely. Eggless recipes are also easier to make as there’s no chance of overcooking your custard at which point the eggs start to scramble.

Eggs are high in fat and protein which both stabilize the ice cream and keep the ice crystals small. This results in a denser and creamier ice cream. Eggless ice creams will freeze harder and have a somewhat chewy texture.

The overrun of an ice cream is the technical term for how much air is incorporated into it when churning. If the volume of your ice cream increases by a third during churning then the overrun would be 33%. Most premium commercial ice creams have an overrun of around 25%. Cheaper commercial ice creams can have an overrun of 50 – 90%! Overrun is determined by how fast the ice cream is churned and is also affected by the recipe formulation. The faster the churning, the more air gets incorporated and the greater the overrun.

The higher the overrun, the fluffier the ice cream and the quicker it will melt when out of the freezer. Lower overrun is a hallmark of premium ice cream which will be denser and you’ll get more ice cream and less air with each bite.

Most home ice cream makers only have one speed setting so you won’t be able to change the overrun for your recipes. Some of the higher end machines have multiple settings, up to the Breville BCI600XL which has 12 different speed settings (actually ‘hardness’ but they can be utilized to achieve different overrun levels). As noted above, one of the things that differentiates Gelato is a lower overrun so it definitely helps to have a premium machine that will allow for that variation.

Sugar obviously gives sweetness to your ice cream but it also lowers the freezing point of water which affects the texture. The higher the sugar content, the softer the ice cream but too much will make it too soft to the point that it might not freeze at all. The lower the sugar content, the harder and icier your ice cream is likely to be and too hard and icy is not usually desirable so you need to find the right balance.

Different types of sugar have different levels of sweetness and different effects on the freezing point. Most homemade recipes will stick with table sugar but you might also see corn syrup or honey used as a sweetener which have different properties. Corn syrup is less sweet so you can use more of it to create the desired softness without making the ice cream too sweet.

Stabilizers prevent the formation of ice crystals during the churning process, hence improving the texture. They slow down the melting process and keep the air bubbles in your ice cream. Most homemade recipes don’t include stabilizers but they’re definitely worth experimenting with to see what the effects are. Particularly considering that home ice cream makers and home freezers are not tuned to a standard for commercial ice cream, stabilizers can help to improve the texture and prolong the shelf life of your creations. There are many different types of stabilizers including starch (ie. corn starch), guar gum and carrageenan.

I hope I’ve given you a few things to think about with this article. Some of these differences you probably new already but it’s always good to get confirmation and maybe you even learned a thing or two. Like me, you’ll probably find yourself wondering how all these variations taste and the experience of the textures. This article covers the basic and most common variations but there are others, just start exploring, particularly with ice cream recipes from around the world.